The rumor mill ran wild following the highly anticipated MacBook Pro refresh. Liquid metal, standard SSDs, higher-res, updated design were among the false reports. What has changed, however, are the internals? Questions like: is this model worth upgrading to, or should I wait for the new model, will be answered in this article. Let’s start with the changes.

The model under the microscope is the high-end 15″ model, which contains a 2.2ghz Sandy Bride quad-core i7 processor, 4Gb ram, and a 6750m from AMD. That’s a big upgrade from the previous generation. I’ve also opted for the high-res screen, a given in my (mac!)book. *pun intended* Apart from the high-end 15″ MacBook Pro, Apple also offers two 13″ models and a single 17″ machine. Across the board, each model enjoys a faster processor, faster ram, and thunderbolt.

The latter is very interesting and a first for any laptop on the market! I’m actually not going into too much detail about it, but basically, it’s Intel’s answer to USB. The connection can transfer video, audio, and data, all simultaneously at very high speeds. That means that a DVD movie will transfer to external storage in about 6 seconds once supported hardware comes out.

When deciding between models, realize that the 13″ models all share an Intel HD 3000 graphics as a sole provider. This is a source of frustration for gamers because the chip is pretty weak for modern games. The smaller models also use the gaps between the keys as speaker holes and lack a subwoofer; expect a slightly more tin sound. The 17″ model has a 1920×1200 display and similar specs to the 15″ MacBook pro. This is both a good and bad thing. The good thing is that you’ll have slightly more screen real estate, but gaming on the native resolution will definitely struggle.

As noted, Apple has retained its famous unibody design for this generation of MacBooks. I don’t consider this a bad thing. Built from a single piece of aluminum, this laptop is very scratch-resistant and clean-looking. My previous MacBook Pro (same design) definitely withstood the test of time. (not a single scratch!) 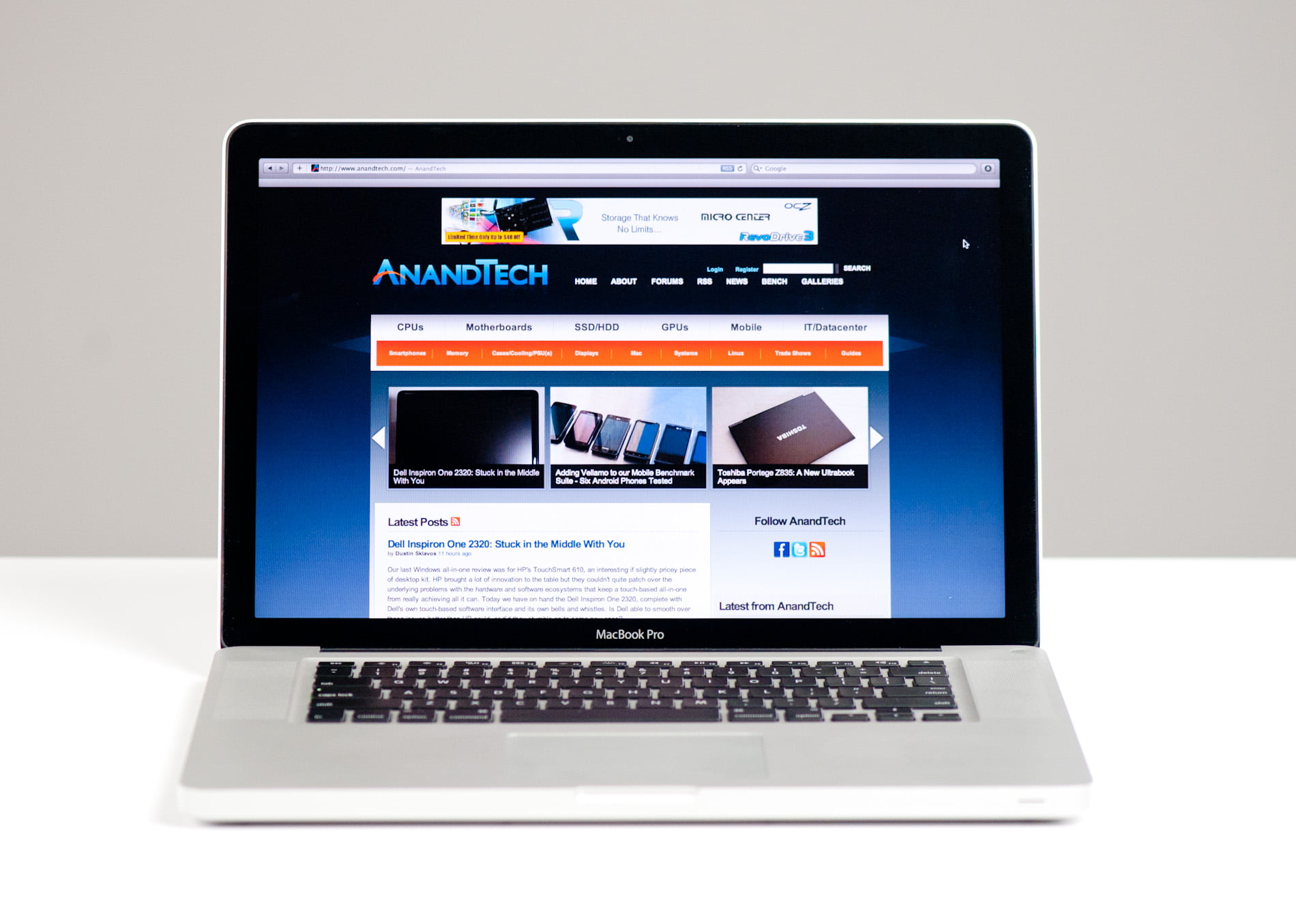 In my view, this is the best-looking laptop apart from the MacBook Air. Its design is very symmetrical. Everything is exactly where you’d expect it to be, like how the speaker holes match the vertical space used by the keyboard keys. The width of the hinge also perfectly matches the horizontal keyboard space. Using a combination of black and silver, Apple managed to create something very aesthetically pleasing. However, I’d have loved to see some MacBook Air elements take over. The battery indicator, for one, seems unnecessary to me, and the DVD super drive is bound to disappear. Guess we can expect those changes in a redesign later on. Still, the MacBook Pro 2011 is among the sturdiest and best-looking laptops out there, a real winner!

The 15″ model comes standard with a resolution of 1440×900. This can be upgraded to 1680×1050, something everyone should do. Apple uses a high-end TN display, so still no IPS, unfortunately. The viewing angles are decent. It’s possible to read the text and distinguish details at any angle. However, inevitably, the screen washes out from the sides, especially grays, become yellowish; notice the app store panel lines. I also noticed that the screen has a weak spot for lower and upper angles. Even at a small degree, colors started to fade. This is why we want IPS panels; they’re noticeably better at this. Still, the MacBook Pro has one of the better screens out there. The colors really pop, and the pixel density feels just right. People looking for ultra-realistic color reproductions will have to look at production screens; what else is new?

For the first time, Apple managed to jam an HD facetime camera into the glossy display. This is a logical step in the evolution of video calling between Apple devices. To test this, I called my laptop using the iPhone 4 and configured the facetime app. Calling is easy and direct. Click a phone number or e-mail in your contacts, and the system will attempt to set up a face-time call. This process can sometimes take a little longer depending on the network, but it’s usually a smooth ride after the initial process. The image is crisp and pleasing but without being overwhelming. The image is still soft and comparable to Logitech solutions at best. Still, for such a small camera, that’s a solid achievement.

Now it’s time to put the internals to the test. This is Apple’s fastest notebook offering, so my expectations were sky-high. The first thing I wanted to have a look at is the battery. Apple advertises 7 hours of battery for every MacBook Pro model it offers. That’s down from 8-10 hours for the previous generation. This is probably due to the faster processor and a new way of testing that supposedly better represents real-world results. I fully charged the laptop and left the settings at default. The brightness sensor was turned on for more realistic results. During the test, I used everyday apps like Microsoft Word and Safari. To mix things up, some light 3D work was thrown into the mix. 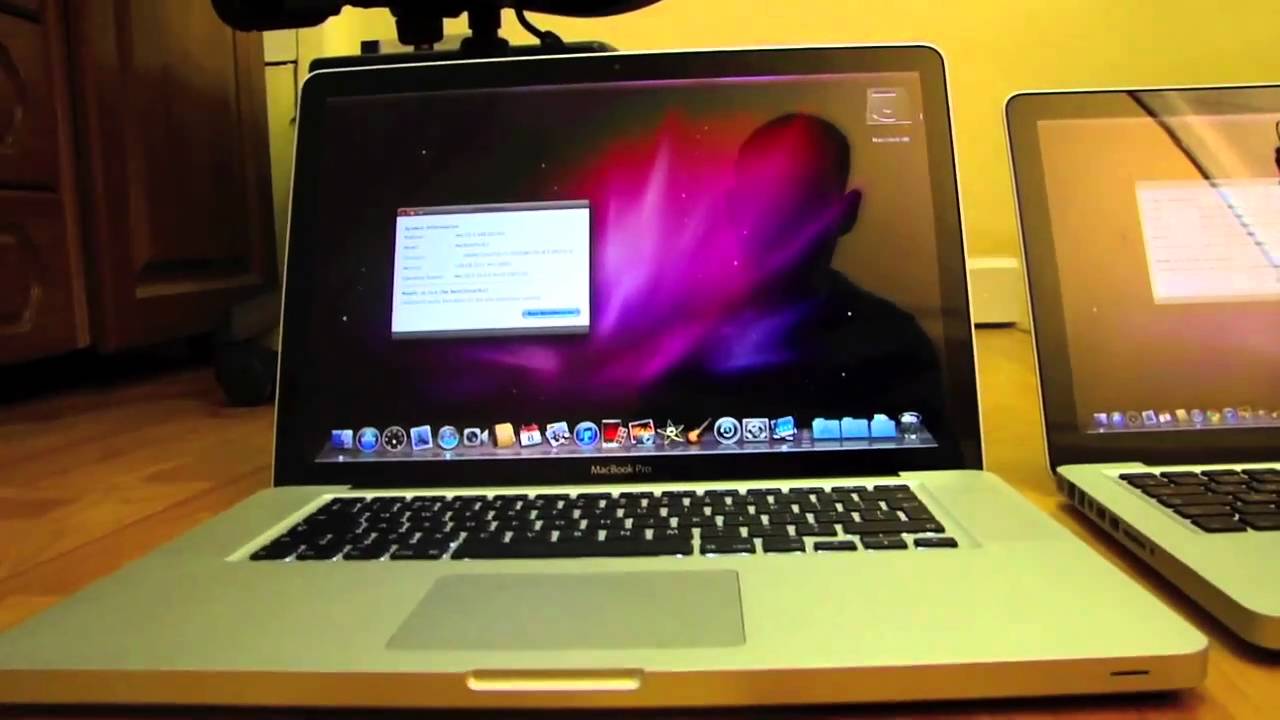 Very decent results. It’s still not at the point of an entire workday but does very well especially considering it has a thirsty quad-core working at all times. MacBook Air is king in the battery department.

This popular mac-benchmarking tool is often used as the standard to calculate hardware speed. Unfortunately, the free version only runs in 32bit, so the ultimate speed should be a bit faster even. Mind you: the other macs also ran in 32bit mode. So for the people still in doubt whether this speed bump is considerable, here’s your answer. It’s almost twice as fast!

This free benchmarking tool is a great way to get a clear picture of the machine. Not only does it give a score, but it also compares the strength and weaknesses of each mac. To prevent incidental scores, this test was run three times and averaged out the following score. The MacBook Pro outperformed its predecessor easily. The CPU score increase may not look like much, but the i7 was already a screamer and to make a 30 point jump over that is a lot. Also, considering that the dual-core → i7 gap is equally large.

The time it takes to launch an app is essential for a proper user experience. The Air does really well at this, so I used it as the benchmark. The MacBook Pro comes with a new generation of 750GB 5400rpm drives. The extra data density and latest Seagate technologies should give it the edge over previous Pro-models. But how close can it get to its SSD speedy thinner sister? Both machines woke from a cold boot when they put down these scores. It looks like the MacBook Air is 2-3x faster. Now some smaller applications:

Quite a difference, and it’s noticeable. Having used both machines sometimes, the Pro feels slower. I should note that once applications have been opened, speeds do improve a lot. Opening up Photoshop for a second time only takes 4 seconds. But from a cold boot, the Air conquers all. Luckily users are free to upgrade the RAM and Storage later on as SSD prices continue to drop. I can’t wait!

Now this one is a biggie. Let’s see how Intel’s Sandy Bridge fairs in a pure processor-intensive task; converting a movie to the iPhone format. To test this, I installed a video converter from Slysoft and loaded up a 700mb.avi movie. Settings were left at default, and the target file was set to “iPhone 4, mp4”, with 640×480 pixels.

Now mind you, the MacBook Air has a 1.86ghz dual-core processor compared to the Sandy Bridge quad-core i7 2.2ghz from the Pro model. That’s two generations behind and lacking two extra cores, it shows. This is the strength of the current MacBook Pro generation; it really is a portable workhorse. It should also be shared that the MacBook Pro’s processor kept a 20 ~ 25% margin at all times, whereas the Air kept pushing its limits.

This particular model comes equipped with a Radeon 6750m 1GB GPU. That’s up from the Nvidia 330m 512MB present in previous MacBooks. Now it’s time to see how much difference a year makes. Games were either tested in Mac natively or under Bootcamp (Windows 7, 64bit).

Released in 2007, Crytek had set the bar for hardware for many years now. And still, new products struggle to run the game at anything beyond 1920×1080 res. I first attempted a run at 1024x 768 pixels, comparing it to last year’s outing. That’s pretty good, and I actually got a little daring. So I upped the resolution to 1670×1050 (native, BTO) and ran the same tests.

Using the native resolution, some gamers may want to divert to medium settings. Still, for a laptop, these are really decent scores!

Games like COH have turned out to be real classics. Playing skirmish is still a blast, and because the game is from 2007, high settings should be on the cards. I turned every dial to maximum and held my breath.

For no apparent reason, Company of Heroes can be run at full, and the game still looks terrific. The minimum was 1.8fps, but upon further investigation, this only happened once for a split second. So seemingly, the system was doing something in the background, which caused some momentary instability.

Codemasters’ latest racer. I used the latest 1.01 patch (DX11) and the internal benchmarking tool, including a full grid lap around the Silverstone circuit. Remember that DX11 settings are only used in the ultra range.

The game performance is really good for a midsized laptop. , it should be said that the fan speed went pretty wild during some of the peak moments. In fact, sometimes they hit 2500+rpm for seemingly no reason. Here are the temp and decibels produced, according to internal readings and an iPhone decibel app.

To get a good reading, I played Civilization 5 (mac native, though lazy port) for a few hours and kept steady track of the DB throughout. The ambient was dead silent apart from some occasional cars/talks etc. I cut those out and calculated the average. 38db – 46.3db. With an average of 42.6db. This may or may not ring any bells, but the fans were audible in human language but stayed in check. They would be too loud for a dramatic scene in a movie, but gameplay-wise it’s fine. The fans didn’t start kicking in until about 20 minutes into the game, after which they remained steady at about 2700rpm each. Temps clocked at the following. This again may or may not tell a lot, but in any case, the Macbook wasn’t complaining, and the case felt warm at best. Note, though, that it’s early spring now, and things could be different in mid-June. But from experience, I think everything’s just fine.